Spatial: The Platform for Augmented and Virtual Reality Collaboration

Spatial is an augmented and virtual reality platform that allows users to easily share and collaborate on files in 3D space. It’s compatible with headsets like the Oculus Rift, Gear VR, and HTC Vive, as well as smartphone AR experiences like Google Tango and ARKit for iOS devices. Spatial lets you host collaborative sessions with up to 10 people at a time.

If you’re just getting into the space, there are a lot of new terms to absorb. And some seem more like marketing than anything. But what’s actually the difference between VR, AR, MR, and XR? Â Well VR (virtual reality) is an immersive 360-degree computer-generated environment that lets you interact with other people in real-time, while AR (augmented reality) superimposes graphics onto the environment around you as seen through your device camera. But what about MR (mixed reality)? It allows users to mix both virtual and physical worlds together in a way that blends seamlessly with each other. MR can have the ability to layer digital objects on top of real-world spaces or integrate them fully into the location. As opposed to only seeing it on a screen. One application of mixed reality is called Hololens. Which overlays 3D images over the user’s field of vision – much like augmented reality but with richer graphics and sound effects! So when it comes down to deciding which type of VR experience is best suited for your needs, think about whether you want your surroundings enhanced or completely replaced by CGI simulations.

Why are we building Spatial?

Spatial is on a mission to create new ways of working together that are closer to how humans naturally behave. They’ve noticed that in the modern world, people are increasingly removed from their colleagues. They may work in the same office building, but never have any meaningful interactions with one another. And with remote work being an increasingly popular option, people spend more time interacting digitally with teammates than in person. In their research into human behavior, they found that what people crave is face-to-face contact with each other and their ideas, while connecting better with remote colleagues as well.

How can businesses use Spatial?

While still in the early stages of development, Spatial can offer a diverse range of companies an opportunity to test the platform’s capabilities. For example, a product design company can use Spatial to collaborate with an architecture firm in order to visualize their vision on paper. Once given feedback by their collaborators, the designers can then implement necessary changes before turning the 3D model into a working prototype.

Because it’s been designed specifically for AR/VR technology, this system does not rely on expensive equipment or software from other providers such as Unity or Unreal Engine.

Who can benefit from using Spatial?

– Education can create a safe, immersive space where students can learn through simulation.

– Designers, architects, engineers, and other professionals in the construction field can do 3D design without the need of any physical materials.

– Applications in AR/VR are endless; they allow people to create new stories, collaborate with others on projects, explore spaces that don’t exist yet (e.g., archaeology), and more.

What are people saying about Spatial?

Augmented reality has long been touted as the future of computing, with its ability to transport virtual objects into our world; but it always lacked that crucial quality of presence. Spatial wants to make augmented reality just as indispensable by bringing both real-time collaboration and live streaming. Founder Logan Fulton was initially inspired by Google Docs’ collaborative editing while teaching in Indonesia, which made him realize how much easier face-to-face interaction would be if he could drop a patient’s MRI or scan on the table in front of them. Realizing the extent to which modern businesses rely on collaboration, he pivoted his original AR idea into a product that would take advantage of Spatial’s existing large player base. 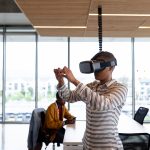 A Glimpse into the Metaverse: An Introduction to Stageverse

Ethereum Blockchain: The Good, the Bad, and the Metaverse